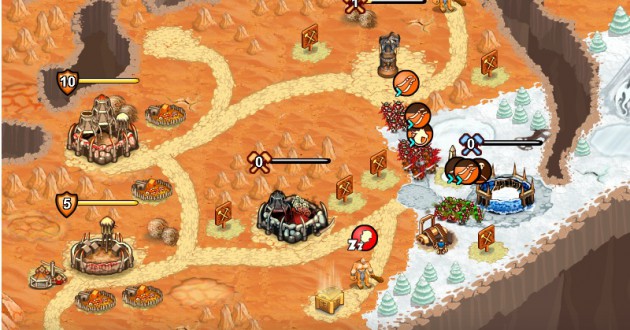 Takeover is actually a mixture of Defense Game and real time strategy. Three kingdoms fight for supremacy on an abandoned island. Therefore, they're building cities, improve them and formate great armies for the battle. Your task is to be one of the three leaders and try your very best. In total, there are three different campaigns, many expansions and wonderful units are waiting to be discovered. Irivsoft has put a lot of effort into this and it shows how much fun a free-to play browser based game can come up with.

At first, you play the human campaign and you always own a capital, from where you constrict your units. There are smaller country parts, where commodities, more housing or additional magical power can be produced in the surrounding areas.

Once you have formed your army, you select it and send the army into battle against the enemies and cities. Your goal is the defrayal of the whole country and by doing so taking over other cities is from great help for your purposes.

The first missions are relatively easy and no advanced tactics are necessary to succeed in here. Only later in the game Takeover it is getting more tricky and sometimes playing older missions to accumulate more XP for certain upgrades becomes a vital imperative. Once you've made yourself familiar with the game your wish will definitely become to master all three campaigns.

Essentially a neat strategy game, in which little difficulties will arise later on. Graphics are fine and the level system adds some spice to it. Unfortunately, it isn't exactly an epic game, but one or two whole evenings will definitely be occupied by Takeover. Considering, this is a free-to play browser game Takeover is a really good one in total, even though I miss a bit of pace in it, a few more units could be included and maybe a little more accuracy regarding the gameplay wouldn't have been prejudicial to Takeover. Maybe there is going to be a sequel to it and the few rough edges are gonna be smoothened. Anyway, we wish you great fun with Takeover!

Good game, but getting all kinds of achievements may become exhausting in the end.

If you enjoyed playing Takeover, please take the time to click the "Like" Button below. We use the Facebook Likes to generate our Game-Charts and the more Likes a game got, the higher it ranks.