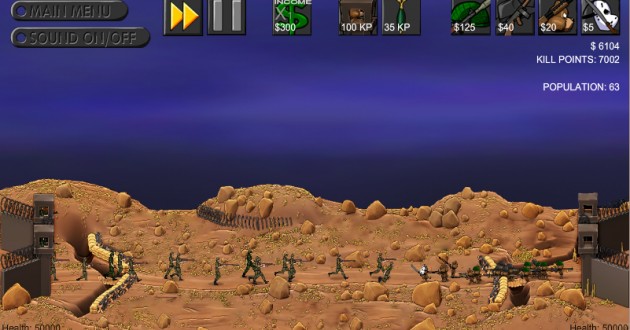 The teddies are out, respectively you play the teddies that are attacked by people. Each party has its own base and tries to protect it while you attack the opponent at the same time. The party that ruins the opponent fort to the ground is going to win. You earn a steady income and you are able to invest this money into troops or a higher benefit. At the same time you receive a K-point for each falling opponent with which the protection can be strengthened or you can order an air support. Teddy Defense especially requires an equilibrated balance of the player that he always makes the right decisions between upgrade and attack. It's not always an advantage to stubborn send unit. Sometimes it might be necessary to let the opponent quite close to you.

It costs 5 $ and it is the close fighter oder the feed for the cannons how I kindly call it. Always foot to collect the opponents at one place and to fight them there. Only really useful as a blocker oder in bigger unions.

This one at least shoots and logs off some opponents before their arrival. Combined with some fighting teddies it is able to cause decent damages. Its unlock costs 75 $ and later on 20 % for each unit.

Yes, this one is for rude actions. 200 $ to unlock and then 40 $ for each unit. Especially in units of 4 or 5 teddies very effective and it is able to proceed far into the opponent's area.

The unlock costs 500 $ and even 125 $ for euch unit. Therefor it goes against everything and everybody. One shoots can get down everything and it cleans really cleans up. This teddy is definitely necessary for the final attack. You should send a group of 20 machine guns first and then 20 mortar teddies following. They strike real hard in order to finish the lap.

Teddy Defense is made quite nice, but it needs rather swift fingers than a solid tactic. Three different difficulty levels are for choice and at least on the third level everybody breaks sweat. The teddies could have been a little more cuddling, but for a flash game it is really ok. Other Defense Games like My little Army bring a lot more fun to play. It would be nice, if you could click on one of the button right underneath the game so we can become a little more public. Thank you and enjoy the game.

Plants, Farmer, Soldier... it was just a matter of time until teddies would appear...

If you enjoyed playing Teddy Defense, please take the time to click the "Like" Button below. We use the Facebook Likes to generate our Game-Charts and the more Likes a game got, the higher it ranks.