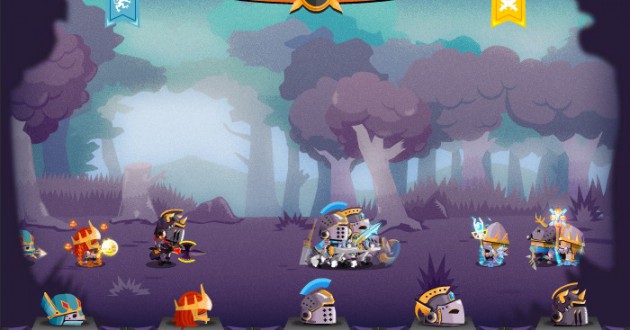 Description of The Kings League Odyssey

In the course of a cowardly assault of the king, the royal knight Whitney gets killed. As a consequence the king announces a new league therefore, to find the best and most powerful man to take Whitneys place as the protector of the king. Strive with your small group of men in The Kings League Odyssey for your place on the top and defeat all other knights. The Kings League Odyssey is a breathtaking Defense Game in combination with RPG elements. Train your fighters, occupy coutries and survive dangerous quests. Until you reach your goal you have to go through a lot, but it's well worth.

At first you select your difficulty level, for beginners I recommend the medium level. Thereafter, you reach the main screen including your one and only fighter. In the menu you can recruit more supporters, but be careful not to run out of money. By the time, your army sums up to an amount of 5 fighters and can be trained physically.

Next to the gold there are crystals as a resource, with which single fighters can be upgraded (head-symbol) or even whole classes. In addition, to the single steps you should let your fighters practise as often as possible. That way, your knights become stronger and stronger and new attributes will be unlocked by the time.

Apart from regular league fights you can do quests, which give you a better reputation and commodities in return. At the map you can find estates, which can be occupied and that is how your basic income is ensured. In the long run it is mostly about being victorious in the final fight to take whitneys place next to the king. A little hint: commodities can bring an extra 1000 points!

A fancy, lean Defense Game, in which you might start to sweat. The fights can't be influenced directly, but the strategical background is very good. Soundwise, the game isn't spectacular, but also not too annoying. A Defense Game, in which it all depends on choosing the right tasks to be able to win the title in the end. And then of course, there is this dragon, which has to be taken down best by two archers. The Kings League Odyssey is a useful game which isn't too difficult, too.
magic and archers against dragons

If you enjoyed playing The Kings League Odyssey, please take the time to click the "Like" Button below. We use the Facebook Likes to generate our Game-Charts and the more Likes a game got, the higher it ranks.

Comments on The Kings League Odyssey