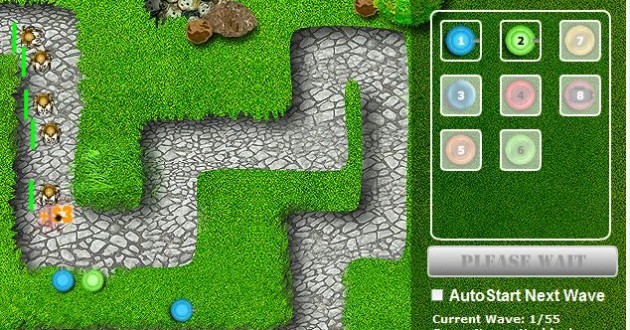 Tower Defense War is such a pleasant TD. Three different categories with four different levels at a time. Overall there are eight different towers that will be described here later on. There are possibilities to upgrade as well. The beginning is always a little difficult, but in the game everything turns out to be quite easy. You just have to figure out a good line of attack, how to place the towers and especially which towers. The graphics are ok and the game play quite nice. The waves are basic so that even older computers are able to manage it.

The first tower is able to act against air units and land units good. It is very cheap and should be distributed all over the field a couple times. Especially, later in the game against flight units it is a good backup possibility.

The cannon tower does a good damage against land units. But its power is focused on special facilities. On the one hand it has a splash attack, on the other hand it is able to slow down the opponent. This combination makes it an important tower along the track.

This tower uses electric energy very fast and often towards an object. Especially against flying units this tower is a very good choice.

According to its name this tower attacks ground units. Additionally it slows down those burning units. At the beginning of a map it's a good tower since its third skill is kind of a mass damage. Its disadvantage is the short reach und its low shooting frequency.

You need nothing else than damage? This laser tower is your first choice. It shoots fast, exactly and rough. A lot of damage in a huge range. If ground units or air units - it doesn't matter.

It poisons the opponent even within a short radius. At the beginning of the track it makes a good job against ground units.

In my opinion the most important tower in this game. It shoots a long streak and everything that's in its way loses life energy proportionally. Especially against later monsters a must since every single shoots is good. After this tower you need a killing unit which takes away the last life energy. Shoots against air units and ground units.

The most expensive tower of the game, such an all rounder. To poison, slow down in a big radius. It fights against flying units and ground units. If an object is damaged the rockets look for the next one. If you put it right in the centre of the map, you have a good supporting unit. But this tower doesn't have a true killing talent. It's the only unit which has special abilities against air units.

Primarily you should have a fireball tower at the entrance, so the monster will be slowed down and get a damage. This also is the right place for sonic towers since they can shoot into the crowd. Additionally the poison tower should be used early. In the middle part damage towers should be used with which you can trap the remaining life points. Right in the centre belongs a rocket tower, so it can show his effect very long. The track exit can be covered by a laser tower that can mobilize the last power against huge opponents. Distributed over the track there should be some submachine towers,so flying units will get damage consequently no matter which route they will choose.

Certainly there are better Tower Defense Games than Power Defense War, but it's quote a solid edition. The game works steady and you can at least play alle maps once. Everybody who liked das game or our website, may gently send us a Like on Facebook. You will find this page faster though and can show your friends that you played this game. We frequently update and provide new Tower Defense Games.

If you enjoyed playing Tower Defense War, please take the time to click the "Like" Button below. We use the Facebook Likes to generate our Game-Charts and the more Likes a game got, the higher it ranks.