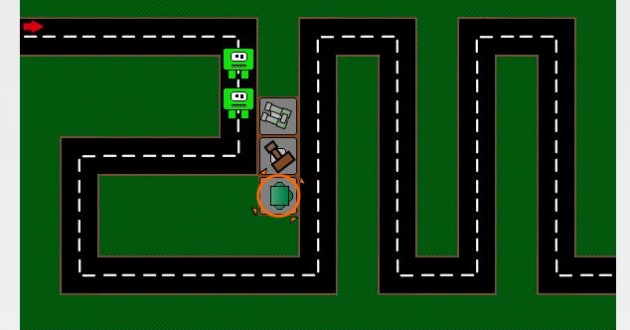 Unfortunately a button to forerun fast is missing, so you are forced to ride out every single wave. Indeed you can take the next wave a little earlier, but this is not advisable since the waves will overlap each other. The main rival always walk at the end of the waves. In order to get through the game easily I suggest the rocket launcher (enlarged), who distributes a lot of damage along a big distance, so he can mainly be suited as backup. You should place one or two ice towers in the front rows before starting to walk.

The towers can be updated by a click. The appropriate button appears as soon as you have collected enough gold. Basically it's advisable to built out every tower as far as possible before using a new tower.

I've seen a lot better Tower Defense Games. But as a neat game it's not to despise and you should at least have played the campaign once. People being cool can try to collect all achievements. For owners of a Mochiaccount there is a high score in the survival mode. The graphic is bad while listening to the music makes you a little aggressive within 10 minutes. I got the impression that there's no big difference which tower you rise. The distributed damage seems to be quite similar. Anyhow who still like this game, is invited to vote for the game via Google or Facebook.

If you enjoyed playing Troops Tower Defense, please take the time to click the "Like" Button below. We use the Facebook Likes to generate our Game-Charts and the more Likes a game got, the higher it ranks.