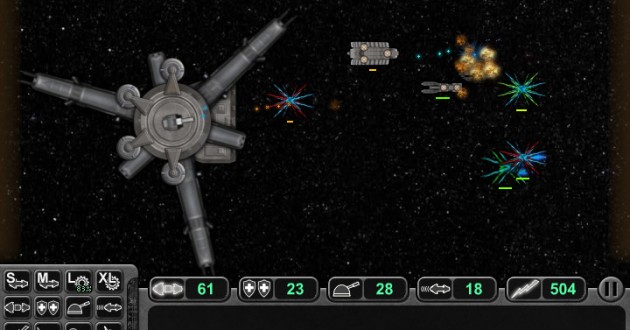 Ultranought is a game that finds its story in space. You control a mothership and sail along and from time to time you come across other motherships. Those other ships need to be fought against to secure your part in space. In addition to that, you can produce smaller ships through numerous different ways as well as upgrade your mothership. As a consequence there can only be one survivor in scenarios like these.

The game is played by mouse and keyboard. On the bottom left you can find a panel on whixh you can find different parts for your ships that can be used to upgrade the mothership. Eventually, everything is based on energy and that is why you should focuse onto that. With the keys 1-4 you can reach the built-menu of the battle ships directly and you can produce up to four ships at a time simultaneously. With the arrow keys you can move over the screen and always put an eye on the current battle status. The ships themselves can unfortunately not be influenced. Between the battles there is a short story part inlcuded.

The tactics consists of level ups for the mothership as fast as possible and carry the battle straight to the enemy. Here you should upgrade the canon and the superweapon of the mothership as well. The game can be a bit chewy until you are able to unlock the elite level. That is the point where Ultranought gets a bit tricky.

Ultranought is a beautiful and solid Defense Game. Graphics are fine, the game in general is good fun. Unfortunalely the dificulty increases only little while playing. The single additional features, that are to be unlocked between the missions are catching though. The game is a good choice for space-/universe fans. For simple Defenders a solid choice still. Please vote for us if you like the game.
Bit chewy at times, I still liked to play it in total though

If you enjoyed playing Ultranought, please take the time to click the "Like" Button below. We use the Facebook Likes to generate our Game-Charts and the more Likes a game got, the higher it ranks.