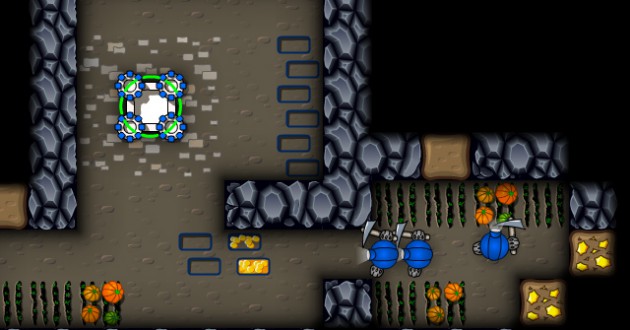 You are living below the ground and try your luck as a dwarf in mining. Unfortunately, there is a lot of wildlife and creatures living there as well and on top of it there are even other dwarf-clans, that are trying their best to make your life miserable. Undermountain is a neat RTS game with elements of Tower Defense. How brave are you in leading your clan? Show it in Undermountain.

The game is played via mouse and just for your information, your subordinates can not be controlled directly. So, as you might imagine, trouble is preprogrammed.

You own a castle in which you have the possibility to build your workmen and soldiers. The soldiers however, do only get unlocked once you've reached the second level. By means of the nice storyline you have several tasks at hand until you reach your goal.

The commodity of the game is gold which you mine and carry to your camp. Next to the gold camps are accommodations to be set up, above all, farms, on which your clan can get food out of. Be advised, stricken workers heal automatically once they eat something.

Towers are quite helpful in the game and can prevent a lot of bad things. If you set up a tower right next to an enemies one your tower is gonna win by the last shot. This information will be very helpful in the long run.

Also nice is the option to play a multiplayer game, in case you wish to play with a friend. Unfortunately, that's about it in Undermountain multiplayer since there is really not much going on there. Before playing a multiplayer game I strongly recommend to finish the campaign to be on the safe side.

The game has a certain charm, even though you'll probably get annoyed about the lack of intelligence the AI has. The late levels can take quite a while and once you do a mistake you might already be dead. To me, this is ok but still, me nerves were raw. Graphics are fine regarding this is a free game. It is well balanced and offers a lot of fun. Personally, I miss a few save games to not have the obligation to always play maps from scratch. Nonetheless, I enjoyed spending my time with Undermountain.

boys, group up and attack all together!

If you enjoyed playing Undermountain, please take the time to click the "Like" Button below. We use the Facebook Likes to generate our Game-Charts and the more Likes a game got, the higher it ranks.