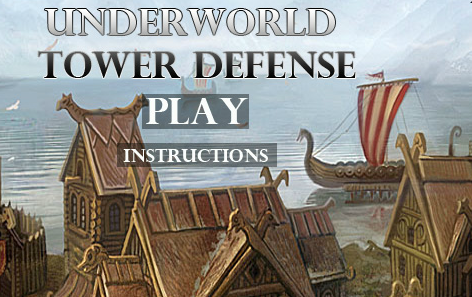 Underworld TD takes place in a time when mankind believed in magic and lived in small villages. In Underworld TD a village is attacked by certain creatures and you have to defend it against the enemy in a classical TD manner. For doing so, you have four different types of units at hand. Those units each possess their own specific skills. Unfortunately, when I was playing it, the sound didn't seem to be working, although there are buttons to switch on and off background noises. The difficulty level for this Tower Defense is quite low and anyone should have mastered the game within half an hour. Sadly, graphics are also poor and therefore some of your assignments are hard to decipher as well as some numbers on the screen.

The Farmer is the smallest and cheapest of all units. He shoots rapidly and can cause a decent damage when he is fully developed. He should always be your basic unit to checkmate a lot of enemies. Unfortunately he has a limited reach but on the other hand he is able to attack an enemy twice on any number of occasions.

Equipped with a sling the Gypsy has a splash damage and can slow down opponents. The damage rate is only low but combined with others the Gypsy can hold the enemy in the rain of fire for a prolonged period of time. That unit should be placed in the front row as well and do the job there. By leveling up the Gypsy it's reach can be expanded.

The guy for the big damage and also for long range attacks. The Barbarian is not cheap at all but if you have the money, build him up as centrally as possible. He shoots across the whole pitch and can mow down each and everyone.

The Wizard id the only unit that can poison the enemy. Sadly, the damage rate is low but also slows down the opponent. Here and there a Wizard alongside the path is a wise choice.

Well, poor graphics, no aspiration and the game seems to demand a lot from your computer since, in my case, the game starts to judder at only 35 waves. Basically, it is still chilling to play and you should probably give it a try. In most cases, it is advisable not to have sound but here it is a bit of a pity. Then, there is no button to speed it up and the waves begin to roll awkwardly. Moreover, after each wave there is a break which doesn't need to be there in my opinion. Underworld TD shows some good basic approaches, but most likely, there hasn't been put enough effort into the whole development. Don't forget to give us a Facebook-like, a Google+1 or a Tweet to help us becoming more popular. Thank you and have fun with Underworld TD!

If you enjoyed playing Underworld TD, please take the time to click the "Like" Button below. We use the Facebook Likes to generate our Game-Charts and the more Likes a game got, the higher it ranks.