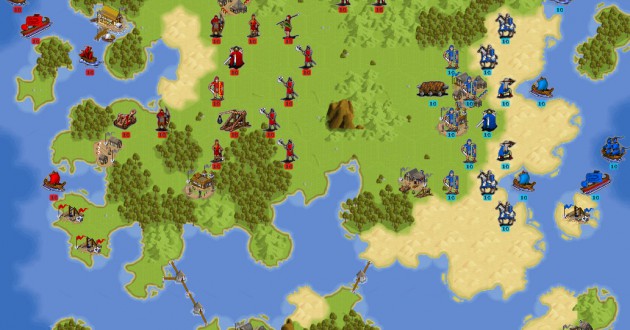 Description of Warnet - Elixir of Youth

Warnet Elixir of Youth is a classical, turn-based strategy game, which is quite similar to former Battle Isle of the Amiga 500. Jump into the body of Jack and hunt for the holy scroll. A thrilling campaign awaits you and requires all of your tactical skill. Play now Warnet - Elixir of Youth for free.

It is played by mouse and once a new campaign is started you get introduced into the game step by step. At first you learn how the game is played and how to fight. Every unit possesses a certain move- and battle-range. The units are divided into ground troopers and sea forces. Especially of interest is the possibility of nautical attacking of ground troopers by ships.

In the first mission sea monsters have to be fought against. Those enemies have to be attacked by heavy ships at first to destroy them later on by long boats.

In the second mission you have to reach a certain spot. Therefore, you have to build up a base and troops. You debark your ships (doubleclick on a ship) and take over structures with a citizen. Here, new units can be created and sent into battle. It is very important to take good care of your heavy ships and get them repaired regularly. It is best to send units straight to the battlefront which are expendable and are recreatable later on. An advice at this point: place melee units at the bottleneck and two archers behind them. That way you can focuse your firing power onto one spot and don't risk to get overpowered by enemies.

The third mission requires to pursue a golden ship. Before getting stuck in long battles it is advisable to get your own ship repaired and maintain the pursuit.

In the fourth mission of Warnet you are fighting with all blue units against a yellow superiority on both sides of a river. It is important to take good care of a moderate own pace as well as the usage of a few units as supporter units for the blue friend.

The fifth mission is really challenging. You get many new units and find yourself under pressure from the beginning. You only have a chance if you dedicate yourself to build up a strong defense.

Considering it's a turn-based strategy game, Warnet - Elixir of Youth has its attraction. Above all, the well balanced units with all their amenities and disamenities make the game interesting. A few more quests wouldn't be bad. The multiplayer version on the external page is too time demanding and boring therefore since you always have to wait for the opponent. If you think about the time that your own turns take you can surely understand, why a lack of longterm motivation occurs, especially with many game crashes included. The game itself on the other hand was well created and considering the kind of game we are handeling here, graphical features are negligible. Thumbs up for Warnet - Elixir of Youth
The campaign was great fun, in contrary to the multiplayer

If you enjoyed playing Warnet - Elixir of Youth, please take the time to click the "Like" Button below. We use the Facebook Likes to generate our Game-Charts and the more Likes a game got, the higher it ranks.

Comments on Warnet – Elixir of Youth