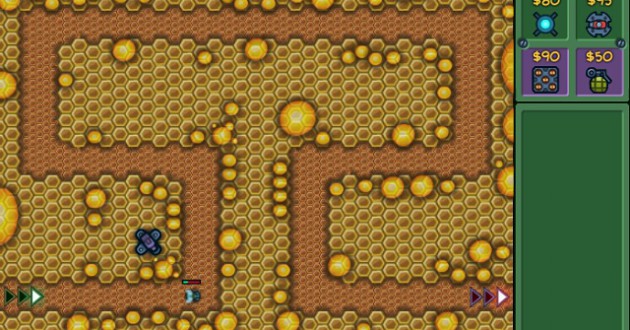 World guard is the next big thing from Notdoppler. Which where the makers of the big succeeded cursed treasure series too. World Guard has 16 Maps, 4 Towers and 2 additional features. What seems pretty little from the beginning, turns out as very big maps. World guard isn't that easy, certainly one of the better TDG's.

It's played by mouse, as always. Just set your towers along the route and let the creeps roll down. All of your towers have special abilities, who have to be particular activated and upgraded, just as further attributes. Attributes are divided in categories of damage, range, and an increase of attack speed. On the highest level towers will deal a lot of damage, but for all that you'll need a strong combination of available towers to kill all monsters. The combination of towers at the right position is the road to success.

After some early disappointments, you'll probably get fascinated and ambitioned of unlocking all available achievements. World Guard is a very good addition to further games made by NotDoppler, even it's nothing for a very long gaming fun. Beside a tidy gameplay, World Guard runs fluid. All in all a very good performance. Two thumps up for this game.

If you enjoyed playing World Guard, please take the time to click the "Like" Button below. We use the Facebook Likes to generate our Game-Charts and the more Likes a game got, the higher it ranks.