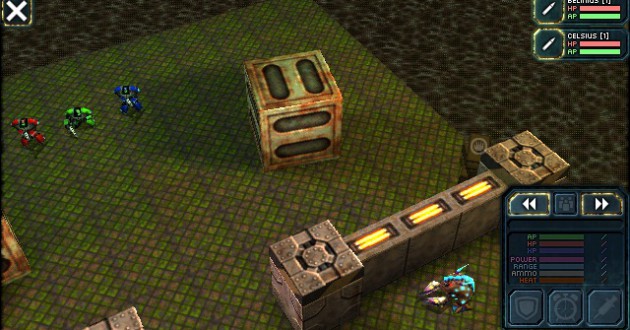 Xenosquad is a strategic Defense Game. You are in the universe with a group a marines and you receive the several tasks by your commander. Unfortunately, there are always those evil aliens and try to kill you. You play in a round based mode and try your best to master each mission and return safely into your mother ship. Once you reached it you prepare your soldiers to send them well-equipped into the next battle. It is a little like these old Xcom- or UFO- series.

The game is played by mouse. For each decision you can take enough time because you manually end your turn. Special here is the setting for the camera: stag + left mouse button to move and arrow buttons for scrolling over the map.

The active soldier is always underlined. Green arrays are the action scope. Yellow arrays show places on which your marine has a goal to fulfill. If you click on a soldier then you got an overview regarding the action points down to the right as well as towards your experience points, ammunition and the heat of the weapons. Straight under it there are the buttons for automated defending and resting.

The Alien artillery isn't shootable at in most cases. That is only possible in auto fight. Moreover, your should rest in those missions since you will probably be killed that way. There are enough monsters which can only be attacked from behind.

Very nice turn based strategy game. Graphics are great, especially when realizing it is a flash based one. Enemies are equipped with a decent AI as well. If you like strategy games you will have a lot of fun with Xenosquad.
ok boys, you will get shot!

If you enjoyed playing Xenosquad, please take the time to click the "Like" Button below. We use the Facebook Likes to generate our Game-Charts and the more Likes a game got, the higher it ranks.