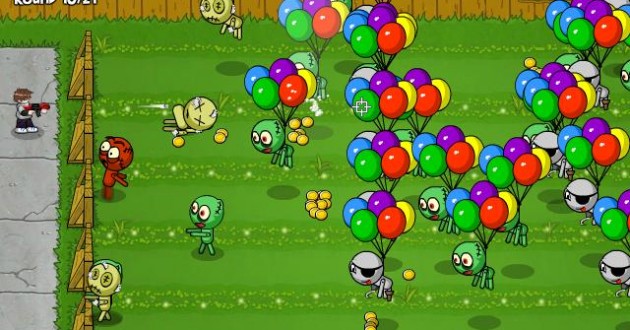 Zombie Dolls is a classic Defense Game. The story is told quickly. Your neighbor was mugged by zombie dolls and was totally beaten up. The dolls breed and therefore they are trying to find new housing space for themselves. Of course, you don't want that and grab a weapon, build barricades and try to get rid of as many dolls as possible. This is your job now and even if it seems to be quite simple at first sight, the missions are getting tougher by the time.

You control the game by mouse and keyboard. With the mouse cursor you can aim and shoot with clicks. As soon as you hit a doll, it is going to drop coins, which can be collected with the cursor. The keyboard works as followed:

G - Throw cherry-bomb (to where your cursor is pointing at)

Between the missions you can purchase weapons and items in return for the collected coins. Here, you can obtain the chery-bombs (30 bucks for 150 of those bombs), upgrade the barricades and receive more life power for the house.

Green dolls are easy to bring down. They are unstable and can't stand your fire power. The ninja dolls are hard to hit and they duck your bombs quite often. Flying dolls have to be taken down to the floor at first. Just after that you can attack them. The red zombies are sprinters, not very stable but extraordinary quick. All other enemies have several pros and cons. Once too many opponents are concentrated at one specific spot it is wise to use cherry-bombs to fight them in chorus.

After all the game offers 18 different missions and a whole lot of fun. Even if it sounds cruel at first the game is much fun, sweet and funny. The frolic background music goes one step further and so you can spend a lot of time by playing Zombie Dolls. Eventually, it is a game which is probably not suitable for being played over and over, again. Once you've finished Zombie Dolls you're most likely done with it. Considering the fact that this is just a small Defense Game ii is really neat and totally does its job.

If you like the article, the game or our page it would be awesome to get a Facebook-like, the help us becoming more popular. Even nicer would it be to get a link from your own page or blog. We promise you in return to keep on trying to put the best Defense Games that are free-to play asap here on our page. And now, beat up the evil dolls!

Nice one, could have been more playing-depth though

If you enjoyed playing Zombie Dolls, please take the time to click the "Like" Button below. We use the Facebook Likes to generate our Game-Charts and the more Likes a game got, the higher it ranks.