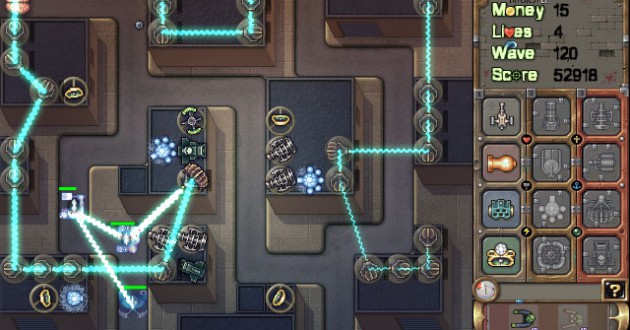 Zombie Tower Defense Uprise is a really great endless-TDG in which you have a great deal to do on future waves. Zombies upraised themselves out of their graves, to crush out the human beings. Your task is to keep the zombies out of special areas by using a great arsenal of the army. There are 4 different maps and one free map all together. Protect your people and yourself against the undead and survive every coming wave of enemies. Furthermore, there are gaming points to score and medals to win.

It's played by mouse as usual, towers are placed by mouse as well. You can upgrade every tower up to level 5 and tower mostly bring special abilities. Choose your tactics as long-term as possible, later zombies will have a lot of power plus armor. In addition to that, creeps will appear pretty fast. Additional-towers are helping here, they weaken the creeps betimes. For example, air raid defense tower or poison towers are able to deal a lot of pre-damage. Flamethrower ignores armor for instance. After a slow start with low budget, big numbered zombies will come by and overrun yourself somehow. Try to avoid this moment as long as possible. Use sensors to uncover invisible Zombies.

At last a nice and well playable TDG. Special-towers are working out, diversified monsters, good gameplay and some nice achievements are making this TDG worth playing it. If you want to criticize something, it's the graphic, which could be more sophisticated.

If you enjoyed playing Zombie Tower Defense Uprise, please take the time to click the "Like" Button below. We use the Facebook Likes to generate our Game-Charts and the more Likes a game got, the higher it ranks.