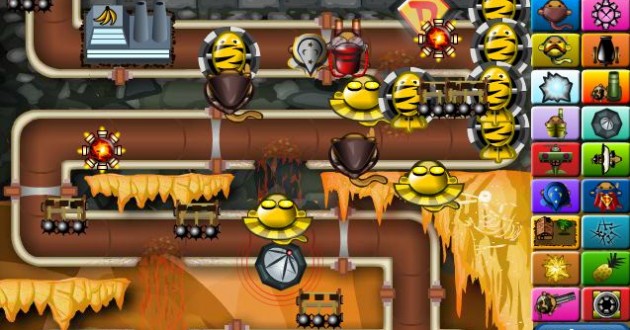 Bloons Tower Defense 4 is back with an expansion and makes the players happy. Again, you are an army of apes and go to a hunt for evil balloons, which are trying to cross the map. Four whole tracks for everyone are there for you free-to play. Moreover, seven additional premium tracks are purchasable. Apart from that, different modes are playable and even a secret ape-pyramid can be unlocked.

Bloons 4 Tower Defense is the latest big hit by Ninja Kiwi and is probably connecting the time until the fifth part of the series is going to be released. In case, you haven't dedicated any of your time to the towers and their abilities you are free to do that here: Bloons 4 Tower Defense Tipps und Tricks. This article here instead is only about the expansion map and offers you a little help regarding that. The units however remain exactly the same as they were in the prequel.

Tips and hints for Bloons 4 Expansion

Even if you don't want to spend any money you should still press the "premium upgrades"- button at first. You will find "Fragil Bombs" there which are free for everyone. Those can simply be unlocked and will improve your strength within the game.

Maps are more or less self-explanatory and bring along a lot of joy as usual. Although, there is a certain tower, or secret which is not that obvious. On the pyramid map you can unlock the ape temple and that temple is going to kill each and everyone. For that, you need to sacrifice not less than 30000 gold and 40 apes. To reach that number of apes you are probably best of to build a whole lot of different ape races on the map. Don't worry, the temple will do the job for you. To see what exactly I'm talking about, have a look at our Youtube video.

However, we don't really like the fact, that Ninja Kiwi goes for the money way this time and many things are only available as premium upgrades. Especially, this becomes obvious while playing the longer tracks. If you have the spare money and are a big Bloons fan you will probably end up spending it, but for the rest of you be advised to better save it. Still, Bloons 4 Expansion is a big player in the Tower Defense territory and can definitely keep it up with Gemcraft. Those two are most likely the two best series at the moment and are only to be beaten by not free-to play games and even here it's mostly graphical highlights which stick out.

Now we wish you good fun with Bloons 4 Expansion and don't forget to give us a Google+1, a tweet or a Facebook-like. Of course, it would be absolutely amazing to give us a link of your own page or blog to help us becoming more popular. That way, you can find us easier in future, your friends get a notice and we simply become more known around the globe. Thank You!

All thumbs up for Bloons 4, only the premium features are annoying.

If you enjoyed playing Bloons Tower Defense 4 Expansion, please take the time to click the "Like" Button below. We use the Facebook Likes to generate our Game-Charts and the more Likes a game got, the higher it ranks.