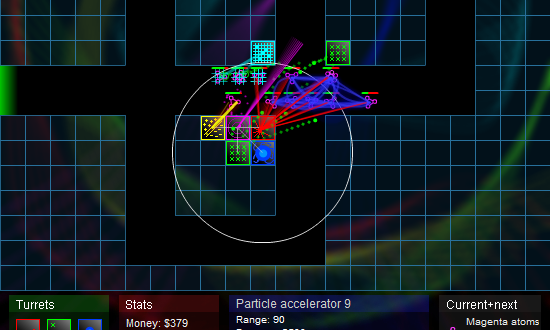 Behind Chromatic Tower Defense no big story is held burrowed. In fact, there is a great Tower Defense Game equipped with sort of vectorial graphics. Relaxed background music and different towers, that are expandable until level nine, are existent as well as a big stake of tactics. That makes the game a really good Tower Defense Game. As a special gift there is a map editor for own tracks included.

In the basic function there are six playable maps which offer a difficulty variety from easy to very hard. It depends mostly on the amount of crossings, that have to be taken by the creeps. Your own defense consists out of five different towers and a radar station, which boosts the damage of the neighbors. If you click on a tower and own enough cash there'll be the possibility of upgrading it. Upgrading them makes them more powerful, extends the shooting range and raises the shooting frequency. At the end of the day, it is all about to not let the opponents cross the whole map and finding a good balance.

Admittedly, a lot of attacks come from many opponents but once in a while there is an end boss who possesses a lot of life energy.

The first map may be sort of easy, but each following raises the claim. It is a lot about tactical understanding and how to restrain within the game. You should invest a bit of time in case you wish to master all possible maps.

The background music is good, graphics alright and the gameplay well balanced. Especially, the map editor offers a lot for tinkerers and can cater for long-lasting joy. The late maps are unitedly tough and there might be one or two frustration outbursts. Still, Chromatic Tower Defense is a nice game and offers much for a Tower Defense Player. It isn't enough for being an epic game, since there are similar games with better graphics and a good background story. Ambitious TDG and we wish much fun with Chromatic Tower Defense.

Okay, some maps are difficult in Chromatic Tower Defense

If you enjoyed playing Chromatic Tower Defense, please take the time to click the "Like" Button below. We use the Facebook Likes to generate our Game-Charts and the more Likes a game got, the higher it ranks.