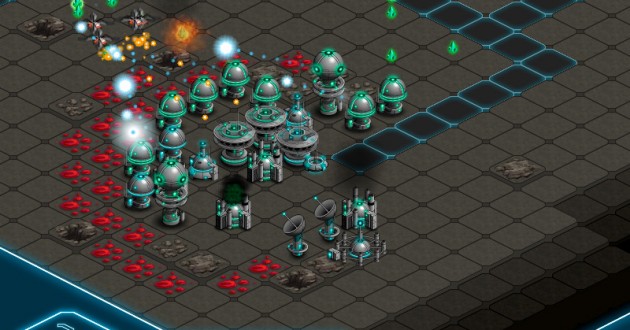 Planet Defense is a truly great Tower Defense game. There are no predetermined gangways and the maps can be freely shaped. This way there are no fixed ways for the creeps and the towers must be placed with a strategy. The game almost contains a facet of a Realtime-Game with the only difference that the player is the defense and does not have any monsters for an attack.

You start with a single basis which does not have any further function (at the beginning). The player controls a little Starship which can be navigated with the W-A-S-D keys. At the bottom left of the game's interface you will find two buttons. One of them is for the Build-Menu, the other one for special functions, like launching bombs. If you want to build a new tower or other building, you need to do this in the direct neighborhood of your starship. With the help of a Reactor you can collect minerals on gemfields. The minerals will help you to produce additional energy. The reactors should be protected by a couple of towers, otherwise they are an easy target for the attacking enemies.

Especially at the beginning of a match you should concentrate your buildings in one corner. This makes it easier do block the incoming attack waves. From there you expand to the remaining battlefield and conquer the enemy bases by simple moving over them by the time no hostile unit is around.

Basically every building can be upgraded after it gathered some experience throughout the battle. A rising blue circle indicates the ability to upgrade.

It's a great Tower Defense Game but it's difficulty is a bit to low. Only the initial waves of the last maps are rather challenging. The graphics are okay and the gameplay gets pretty good after some familiarization. It's a pitty that there is only such a little amount of maps. I would've liked to spent more time on this game!

What is your impression of this game? Please share it in the comments box below and please do not forget to vote for this game by clicking the Facebook "Like" Button :).

Very innovative Mix of TD, DG and Realtime - unfortunately a bit too short.

If you enjoyed playing Planet Defense, please take the time to click the "Like" Button below. We use the Facebook Likes to generate our Game-Charts and the more Likes a game got, the higher it ranks.