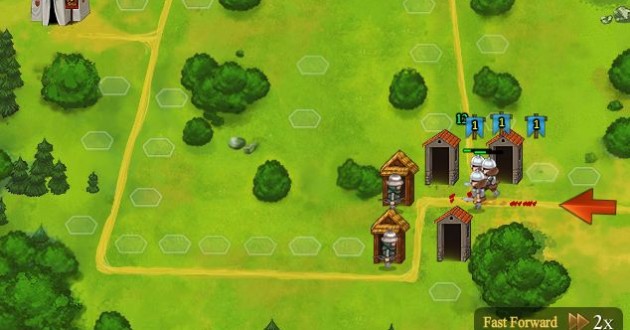 At first, you start on map one and you can only attack one village respectively defend it. The towers or barracks can only be erected a certain spots. Once you've built a hut it takes a while before the unit comes out of it and begins to fight within a given radius. In the beginning of the game it is not obstructive to bank on archer units. Once a unit falls a new one will come out of the hut after a certain amount of time and will be ready to fight instead of the former one.

After surviving all waves you are privileged to build a special edifice on it. That building offers you great advantages in battle. Inside your camp you can find the upgrades for the troops and finally you can go for the next village. For each move you have limited points to spend. You can see how many of them are left by having a look on the AP down at the bottom of the screen. Once those points are depleted you'll have to end your turn. The enemy will now possibly attack one of your own villages. If you loose a few commodities will get lost. Although those commodities are quite important since you pay all kind of buildings and upgrades from it. By the time you will receive more units and it is only a matter of time until you will have played all 20 maps.

It might be so that you'll have to replay some maps since you get paid with commodities according your performance (Be advised, time matters!).

Very good Tower Defense Game, which is not even that one-dimensional. Personally, I enjoyed playing it, not least because of the single upgrades. Unfortunately, there might be a lack of the last bit of aspiration for a TDG fan. From time to time it could be a little too simple for you but especially the last few maps make amends for it. You should plan to spend a good few hours with Demonrift TD. As always we'd be thankful if you were giving us a Facebook-like, a Google+1 or even better to get a link from your own page or blog. We still keep it rolling to find the best Tower Defense and now have fun with Demonrift TD!
Looks nice, great to play, a little bit too easy...maybe

If you enjoyed playing Demonrift TD, please take the time to click the "Like" Button below. We use the Facebook Likes to generate our Game-Charts and the more Likes a game got, the higher it ranks.