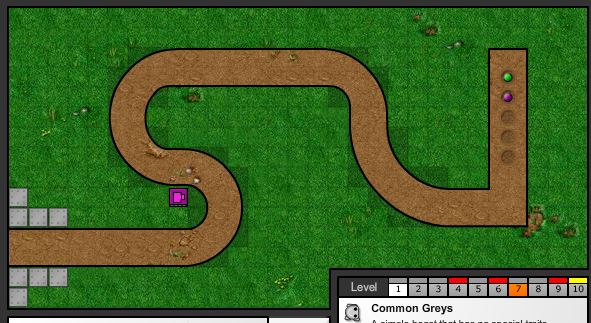 Flash Element 2 truly is a nice Tower Defense Game, such a classic of its genre. You protect different coins which monsters take at the end of the path and try to bring them back over the whole map. To protect himself the players gets eight different towers. Some of those have to be unlocked. The single towers can be upgraded a couple times and they collect experience points. After every couple levels there is a monster boss coming up. If you beat it you will get some points to put those coins on the end of the trail oder to buy any smart things. There are three different maps with 50 exciting waves of monsters.

The graphic might not be that ambitious, aber the game play is made quite good. The monsters get better real fast and you have to use your brain in order to conquer the game. Additionally you get the option to save your money after one lap, so you will earn more interest. That way you have more money for towers later on which can be very expensive.

These are the towers with their abilities:

The smallest tower for defense that you only cause small damages. Such smart in the first laps, but later on not useful at all.

This tower can cause better damages than the Basic Tower and it is able to cause mass damages as well. Therefore it can be used against a crowd of opponents very well.

The tower to slow down in this game. Useful against a lot of opponents and it can bring you some extra seconds if it´s completely upgraded. Those second might be important later on. A tower of the upper level which can be very helpful in the whole game.

Tremendous damage with a single shot and a huge radius. But you can oder a pizza in between two shots...

The little Fire Tower brings many opponent on fire during some time. Very useful against opponents that can heal themselves. That way you can keep they life points on a small level permanent.

The second green tower, that is able to attack four opponent at a time and cause great damages. Especially at the beginning of a map this one always is a pleasure.

Delivers such a mass damage and is great in combination with sticky towers. Causes tremendous damage on crowds of monsters.

This cannon is a need against the bosses of the monsters. It is able to stick single monsters at one place for seconds. Should be used when you unfold your highest damage power.

The big brother with such a great power. This tower can unfold powerful damages with a single shot and is even able to attack covered monsters. Unfortunately it reloads slowly.

The Splinter Tower is absolutely the best one of this game. Indeed it´s a very expensive one, but it causes a really huge damage. Especially in the mottle of the map it dominates the game. It burns everything that gets to close and it does that with such a high speed. Who puts a couple damage tours before and after this one, is definitely safe.

Anyway you should take care that your fire power is concentrated on the first part of the map where you should also place the slow downs. That way the monsters get enough damage. Splinter Towers belonng into the mittle of the track in combination with a couple MK 2 and MK 1 in order to take care of the weaker opponents or to make opponents weaker.

You certainly accomplish you way through Flash Elements TD 2 and you will have a lot of fun. If you like the game and would like to see us on Facebook, it would be great if you would give us a Like on Facebook. That way you will find this page easily later in and it would also be helpful for us. You are also invited to tell about us on Twitter oder VZ. And now enjoy the game.

Very difficult in the last laps, but it´s fun.

If you enjoyed playing Flash Element TD 2, please take the time to click the "Like" Button below. We use the Facebook Likes to generate our Game-Charts and the more Likes a game got, the higher it ranks.