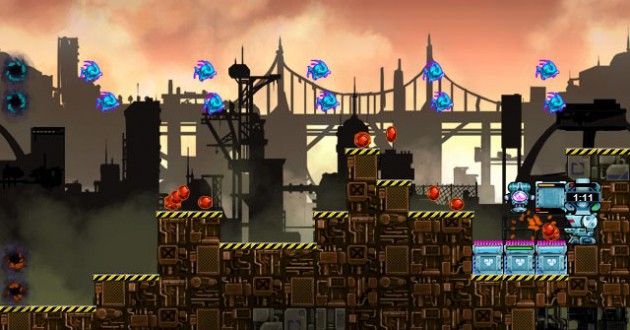 At Gaia Defense the player defends his planet against aliens. Not only with towers but also with a bomb which on explosion stops the invasion. The games goal is to keep the bomb untouched and the towers alive. But all your efforts against your enemies, only this way you will survive. The game consists of 19 missions in one campaign. There are also 10 "stay-alive" levels and as an extra a level-editor to build own maps. This package makes Gaia Defense to a Tower Defense Game with an extraordinary claim.

First off we would highly recommend to play the campaign. It starts with an introduction of each unit. In Gaia Defense you can place your units (towers) wherever you want - but you should keep shoot- and walk-directions in mind. Towers can only aim in one direction (up, down, left, right or sky) so you have to choose wisely.

In addition to the towers there are generators which generate energy. This energy is needed to build new towers. So better build enough of them.

With some skill you can keep the aliens at distance until the bomb explodes - thats a nice additional component of Gaia Defense.

In the survival mode the player tries to stay alive as long as possible. The first seconds might be crucial here. Difficulty rises quite quickly and new aliens spawn faster and faster from the portals. Good players stay alive for more than 5 minutes.

Its an advantage to use the laser on very long distances. Thats because he can hit multiple enemies when then laser beam gets fired at the aliens. Maximal damage can be done this way. You can additionally increase its power with Damage-Plates or rolling bombs. That combination should make the game bearable, especially in "Easy"-mode.

The graphics are okay and the sound can be turned off (luckily ;) ). The gameplay is strange in the beginning, but after some time it proofs its charm. In my opinion this game is quite innovative and the different aliens keep the excitement alive. The survival mode is a welcomed challenge for experienced players. Bundled with the level-editor, Gaia Defense is great package and is worth a try.

The ever changing gangways are nice

If you enjoyed playing Gaia Defense, please take the time to click the "Like" Button below. We use the Facebook Likes to generate our Game-Charts and the more Likes a game got, the higher it ranks.