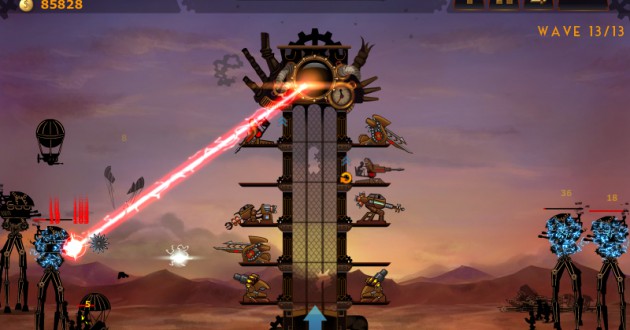 Steampunk Tower finally jump-starts the Tower Defense scene and carries some innovative approaches. You are basically trying to defend your tower using all kinds of artillery. In case you might think that will not challenge you much you're wrong. The difficulty level rises steadily very quickly and at the point where extra missions have got to be mastered the game will get exceedingly difficult. Fascinating, great retro look and a formidable soundtrack conclude Steampunk Tower.

At first, you buy artillery in the middle of the big tower. Thereafter, your purchase can be placed on the right platform and it'll open fire independently against all kind of threats. If you click onto your cannon two bars appear: the upper one is your collected experience and the lower one the remaining ammunition. In case the tower runs out of ammunition you'll got to wait for a little while so that it can reload and join the brawl once more. The different towers also possess their advantages and disadvantages against single branches of service. The machine gun is a great item against infantry, whereas it is almost chanceless against tanks.

If a tower has collected enough experience a little symbol will start to gleam and you are allowed to use all of your money to buy an upgrade. Once you've reached the second level your towels will specialize and certain different tactics will be unlocked by that.

After every mastered mission you receive 1-3 stars for global upgrades depending on how much life power remained. Those stars can be received in all levels and if you use the wisely extra levels can get unlocked. But be careful, the aspiration here is very high and you will really have to give your best in case you'd like to receive all possible upgrades and achievements.

Graphics are great, the soundtrack is excellent and new ideals regarding the TDG-area are usually more than rare to find. Personally, I have to say that the game seems to be a little too stressful since you have to set up your whole defense before the mission starts and you are only able to react later on. The game difficulty is high, but still possible to get through. Nonetheless, Steampunk Power was great fun and maybe there will be a second part of it in future.
Reload boys, reload quicker, the next attack wave is coming sooner than expected!

If you enjoyed playing Steampunk Tower, please take the time to click the "Like" Button below. We use the Facebook Likes to generate our Game-Charts and the more Likes a game got, the higher it ranks.