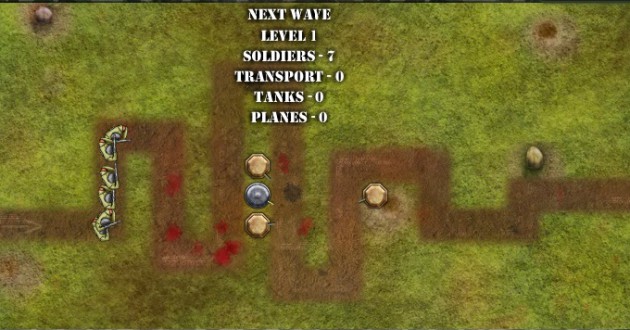 In Colliding Fronts you have to avert yourself against the evil German nazis. To do so you possess several troops as towers and so they cater for a diverting delight. The maps have to be unlocked one after the other and if you are a good Tower Defense Player you won't have any difficulties in there.

You play, as usual, with the mouse and since the game was created by our colleagues from Playtowerdefense, you will have all kind of basic functions within included. You can set a higher game speed, start the next waves earlier and units are respectively to be upgraded. As a special gimmick there are two supporter units, which for one thing allow the towers to reload quicker and for another thing extend their shooting range. Those supporter units can each exert up to three times on one tower.

When you place your units you should keep an eye on the option to let them shoot on to the track more than once and for a longer period of time. Although, you should also consider the fact, that the supporter units can be used most effectively. If you try it out for a while you will definitely find your way soon.

As a second tip, antiaircraft defense and units such as MG-nests are to be put right into the middle of the map, since planes have to be averted from here. After a certain interval of time those air units become larger and you will surely need more than one MG-nest, particularly airships are vigorous.

Unfortunately, absolutely no real big time, the game is just too simple and unidimensional. Once you know how to place the units you will succeed easily and will not have fun for a longer period of time. Graphics are average, at best. The background music is boring. Leastways, a pure Tower Defense game and that is way we provide it. The depth of Colliding Fronts is practically not existent and once you have unlocked all different towers you only want to finish the game. If you are waiting for the next big shot in TDG genre you should go for a different one or simple override your time until then.
Game-profundity little more than zero, sadly

If you enjoyed playing Colliding Fronts, please take the time to click the "Like" Button below. We use the Facebook Likes to generate our Game-Charts and the more Likes a game got, the higher it ranks.