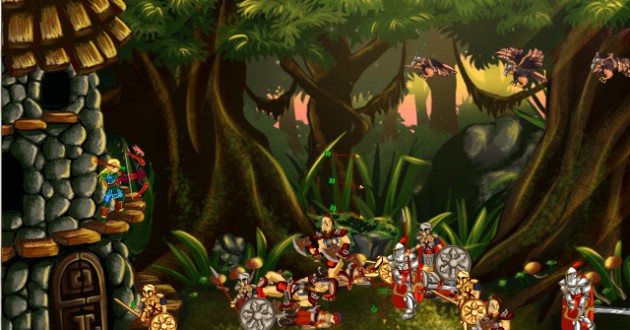 In Dark Ranger you play as a magician, who is striving through unknown, foreign territory and fight against several enemies. You stand on a tower and try to stop enemies with your magic wand and magical spells. You are on the go in two parallel worlds, meet two bosses and receive up to six weapons and six different magical spells. Moreover, you can even upgrade them. Are you able to free the land from the evil forces? Prove it as Dark Ranger.

You play the game by mouse and keyboard. With the left mouse button you fire with your wand and aim with the cursor. With 1-6 buttons on the keyboard you can select the wand you wish to use. With QWEASD you can select the most suitable spells. While a spell is working you are not able to fire but mass destruction comes in play here, which is quite useful.

For every mastered round you receive a small amount of money, which can be spent between maps in the shop. Every wand has three steps of damage.

Once you get stuck, you can replay older maps to save up some money and spend it. In the end, everyone should be able to master the game, it will probably be only a matter of time. As additional motivation there are several awards that you get with certain goals in the game. If you wish to unlock all of them, the challenge becomes bigger of course.

Ok, Dark Ranger is a Defense Game and it is played well. Graphics aren't bad at all and upgrades and several weapons are there to be found. It isn't exactly the greatest game ever, though. Maybe it is because the gameplay isn't the best in the world and the game aspiration isn't high enough. The game is worth a try, at least to be played once. Alternatives, most likely higher rated ones are on our page to be discovered.

If you enjoyed playing Dark Ranger, please take the time to click the "Like" Button below. We use the Facebook Likes to generate our Game-Charts and the more Likes a game got, the higher it ranks.