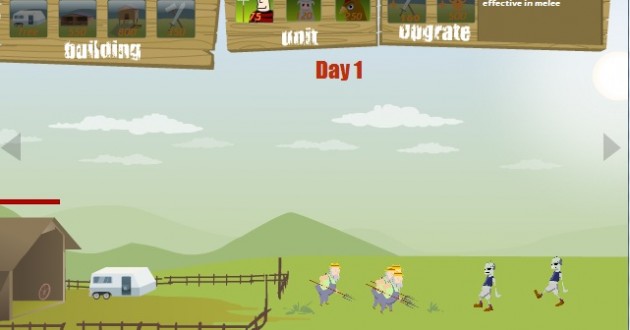 Description of Farmer vs Zombies

Farmer vs Zombies is a funny Defense Game in which you play a farmer who is trying to defend his own farm. There are numerous zombies attacking you coming from the neighboring cemetery. You can now expand your farm a little bit and then you can send out your own troops into battle. The background music is surprisingly soothing and also apart from that the game is great fun. There is also only one path on which the zombies can arrive or on which your troops march into battle.

Your melee unit against the zombies is the farmer himself. He is equipped with his fork and with a leveled up armour.

Using the cow you can shoot. The utters are a welcome support and have a moderate damage. Although, her life energy is quite low so that she can easily die once the zombies attack her.M

The bomb-chicken is your Kamikaze. It flies with a high speed right towards the enemy. Once it has reached the zombies it is going to explode. In exploding it kills everything within a certain range. Unfortunately, it can only be used once, but for killing a group of enemies it is your weapon to take.

After all, the game lasts five virtual days and on each day you are going to damage more of the cemetery. On day one zombies are to be killed quite easily and so it is advisable to fight right in the middle of the meadow and buy all available upgrades. Likewise, on day two and three. After that, only zombie-clowns arrive which are to be fought against with a couple of bomb-chickens. In doing so, you can lead the farmers one after the other towards the cemetery and finally, after day five you'll be the winner.

Above all, keep an eye on always having sufficient money on hand so that you are always in the position of sending out a bomb-chicken in case you're caught in danger.

In case you have enjoyed the game and you like our page please recommend us. You could give us a Facebook-like or a link would be great as well. We promise, we will keep on providing all the best Tower Defense Games in future. And now, get out the forks and end those zombies!

Sadly, the game just lasts five days. Not too difficult.

If you enjoyed playing Farmer vs Zombies, please take the time to click the "Like" Button below. We use the Facebook Likes to generate our Game-Charts and the more Likes a game got, the higher it ranks.

Comments on Farmer vs Zombies