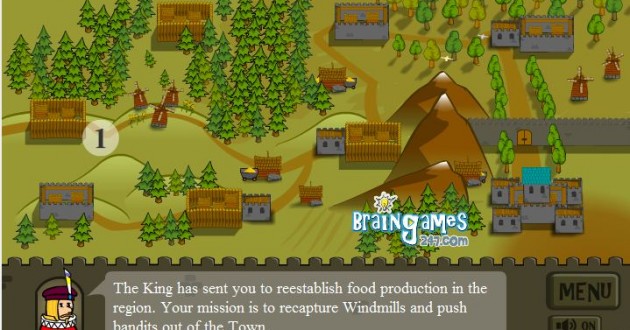 Description of Knights and Castle 2

The game Knights and Castle definitely belongs to the rubric Defense Games. Your job is to defend the western settlements against bandits and you find a yourself confronted by a perfidious plan.At first, everything seems to be quite easy but then after a short while the difficulty levels rises immediately. To your luck nine different units are on hand. Those units will support you in battle. On three different lines you can try to attack the opponent. You will also be attackable along those three ways.

Unfortunately, graphics are not that great and the gameplay seems to be quite slow at first. From the fifth mission all looks a bit different and you will really have to rack your brain. The aim is to destroy the enemies fortress and also to defend yours. There are several buildings on the pitch which you can conquer and by that you receive more gold and more replenishment. For doing that you simply send an ordinary settler into the mines and wind mills. Later in the game you will meet thieves who take a stroll through the enemy lines and drag a sackful of gold into the home fortress.

The controls are linked to the WASD buttons, the arrow keys and the mouse. It is up to you which way you prefer.

As tactical hint, you should hold your position on two lanes and should keep your remaining troops directly positioned in one line facing the enemy. If your front succeeds that way the win is yours since the key lies in a whole army at the enemies gate. The defense units are only able to cause little damage that way and you yourself can slaughter totally at your leisure. If you are in a position to be able to send out thieves, you should always try to have some to be on the go since those provide additional gold. Despite that, do not only rely on thieves. It is also from great importance to have an eye on your population because otherwise you might be the defeated party after a surprise attack.

Personally, I have to say that I love the music between the missions. It is nothing really special though but still an earwig. If you like Defense Games you will certainly be satisfied with Knights and Castle 2. In case you expect great graphics this is probably not your game. Still you might give it a chance. If you like the game, our instructions or the page in general feel free to give us a Facebook-like, a Google+1, a Tweet or even a link of your own page or blog. We would be very thankful for that and you will easier find us in future in return.

What is it with the music between the missions?

If you enjoyed playing Knights and Castle 2, please take the time to click the "Like" Button below. We use the Facebook Likes to generate our Game-Charts and the more Likes a game got, the higher it ranks.

Comments on Knights and Castle 2