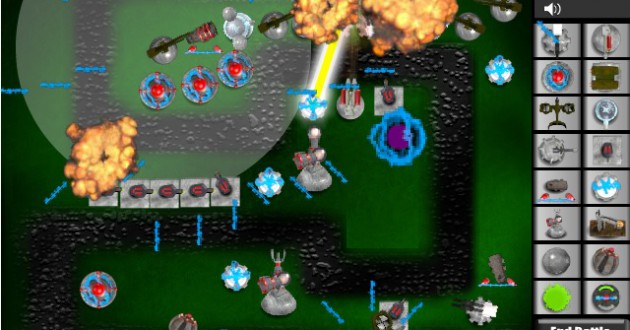 New Tower Defense Game made by Glowmonkey. Proof your TDG skills in three levels of difficulty. In Spatiz Manti, planet earth gets attacked by alien units, human beings are trying to prohibit this assault by using their weapon power. Their arsenal implies 8 towers, 4 traps. You can chose a free position for your weapon and upgrade it 3 times.

First, you have to choose a map and the level difficulty. Depending on the hardness of your chosen level, there are 50, 60 or 70 waves with enemies, with more or less breadwinning and pace. Try to cover an as big area as possible and put your towers along a given path. If you have finished your settings, press "start waves" and the monsters will come instantly. Assuming you have enough money, towers can be upgraded three times. Upgrades refer to a higher level of range and power of your towers. Spatiz Manti has a special tower called 'Mine'. 'Mine' itself isn't able to fight, but you can gain further income, using it. The 'Singularity Gun' is also very special. If you use it wisely, firepower can be concentrated on a smaller area, damage will thus be higher. For having fun right from the start, we suggest not to choose the easiest map at the beginning. Monster waves can there be very slow and boring. Who's caught in a 50-waves-loop on the easy level, has to click pretty much :). So make an appropriate choice.

Towers like, flying fort, Rapid Fire Turret, Goldmine and Catapult, are also known from 'Bloons Tower Defense'. Graphics are modestly, gameplay stucks while building the towers and setting the traps. Spatiz Manti is quite playable, but you'll need some breaks during the game. You'll have to tackle this game aggressively right from the start, to have some fun.

If you enjoyed playing Spatiz Manti, please take the time to click the "Like" Button below. We use the Facebook Likes to generate our Game-Charts and the more Likes a game got, the higher it ranks.