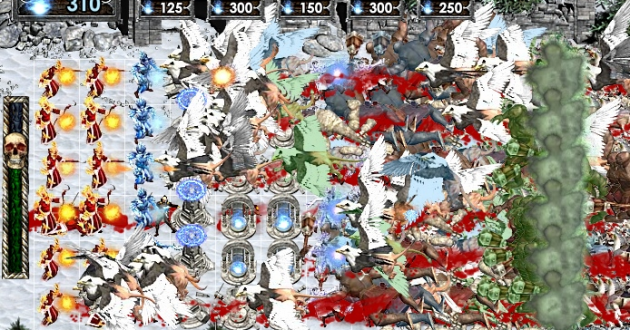 This beautiful Defense Game comes along as if it was a clone of Plants vs Zombies. You formate your troops and you'll have to avoid that the enemies reach your base. For doing so, you own several different units and items. If you let the game take possession of you you can probably dive straight into that world by the time. A special Defense Game, not for everyone though.

Firstly, you start the game in the main menu. Here, you have to choose which units you'd like to take with you into battle. With the money you receive in the fights you can purchase and unlock certain troops and also additional horseman for your armies. Very important is the extra mana fountain. You should alway click on it if it is sparkling. In doing so you'll receive an extra amount of mana and using it you will be able to place more troops on the pitch. The biggest part of the outcome depends on what you do before the actual battle begins. You should make wise decisions here. During the battle you would want an intelligent set up to defend yourself against the enemy. IT is always best to start the game by setting up a mana spring at first and expand your own settlement thereafter. Once it's getting tight you are also able to use several ancient altars to support your own team.

The music is soothing, the game structure is well-balanced and it even possesses a good amount of playing depth. In later missions you might get annoyed since you got to click and click and click your mouse buttons over and over, but then, that's the case in many other Defense Games as well. Caldera Legends is a solid game, which is worth getting played at least once. Sadly, there is a lack of long-term motivation and I would like it better if there were more tactical options to choose from. The available troops are relatively limited. If you like the game, please vote for us on Facebook, Twitter or Google+. Thanks to everyone and have good fun with Caldera Legends!

I don't even like the original, so why this?

If you enjoyed playing Caldera Legends, please take the time to click the "Like" Button below. We use the Facebook Likes to generate our Game-Charts and the more Likes a game got, the higher it ranks.