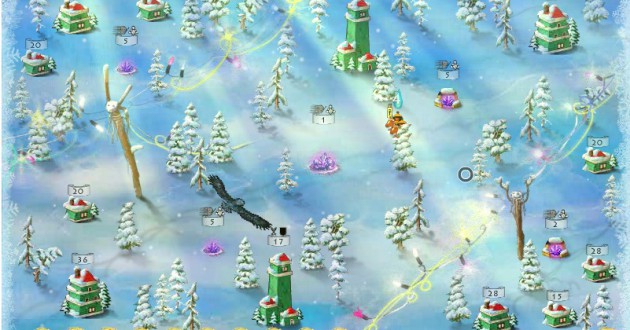 Civilizatons Wars Ice Legend has been released and I am more than delighted that there has been sequel to our absolute favourite Defense Game. The storyline is quickly told, as evil folks have shoot Santa Claus in cold blood straight from his sleigh and now you seek for revenge playing the Christmas elfs. Civilizations Wars Ice Legend takes place in the Far North, again, many tiny figures participate and there are numerous possibilities in the game as expected.

At first glance, you need to breed your corps. For doing that you simply click onto an own building and hold down the left mouse button. Now, half of the troops hit the trail to conquer the new fireside. According to the actual size of the building more or less elfs are able to live there. If you drag over more edifices while holding down the mouse button you are always going to take half of into with you into battle.

There are also magical places, which do not produce corps. Instead of that, those buildings keep more magic on hand. Using this magic makes your spells even more powerful and will inflict a lot of harm to your enemy. Furthermore, there are defense towers, which can open fire on your foes, but are not able to produce troops as well.

Once you have defeated and extinguished an enemy you will win the map and receive experience points to become versed to purchase special abilities. According to your own level you unlock more races, other game modes or are simply stronger and quicker in battle yourself.

A well dignified follow-up of the first part and I can very well reconcile Civilizations Wars Ice Legends with my own conscience. Basically, you just know what you get and the storyline is simple awesome. The short videos between the missions are funny and also apart from that in Civilizations Wars Ice Legend there isn't much to have a bitch about. 23 maps for three races with nine different game modes are just amazing! Have loads of fun with this superb Defense Game.
Both thumbs up for the second part of Civilizations Wars

If you enjoyed playing Civilizations Wars Ice Legend, please take the time to click the "Like" Button below. We use the Facebook Likes to generate our Game-Charts and the more Likes a game got, the higher it ranks.