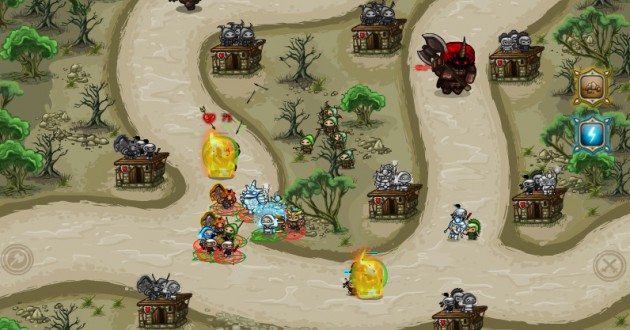 Incursion was launched with the ambition to merge the popular Tower Defense Games Kingdomrush, Demonrift TD and Warcraft 3 into a combined game-expierence. That's not the easiest task but as it turned out, they were successful and Incursion has become one of the best Tower Defense Games of all times. You can play 15 Missions, fight bosses, collect better equipment for your minions and train your skills. By playing mission after mission you can unlock achivements in order to gain access to the higher levels. And with each round the difficulty increases.

In Incursion you do not build Towers, but add troups to existing (preset) buildings. Those troups will attack the incoming enemies on the battlefield. Each barack can be filled with three units, which can consist out of magicians, archers and melee troups. After a building is fully equiped with troups, those units can be upgraded and special skills can be trained during the course of time.

In addition to the troups there are three different magic spells. Those can be used on demand to support your minions on the battlefield. But your main focus should be on the minions, as they are the key to success.

Within the baracks there is a little flag (at the bottom left). If you click these, you can select the position of the units. This is highly recommended for archers and magicians as you don't want them to get involved into melee fights. They perform rather better in the second row in order to shoot at enemies or heal other units.

If you finished a mission you will be awarded with crystals which can be spend on skill-upgrades. The less units you have lost, the more crystals you will get - so you should try to win a mission without loosing any unit to get the maximum amount of crystals. By gathering achivements you will receive additional crystals and your troups get mighter and mighter throughout the gameplay.

Before heading to battle you should make sure to select the right difficulty. While "Easy" is rather for children and beginners, the "Normal"-mode will get harder by the end of the game. The "Hard"-mode is for experienced Tower Defense players and is quite challenging.

A wonderful Tower Defense Game even though it contains only 15 missions. It would be great if the would add additional epic levels to this great game. The graphics are nice, the gameplay fantastic and you get easily into the game. The little background story is another bonus point - it includes funny references to popular fairy tales, like Robin Hood. All in all Incursion is a game which perfectly combines all requirements of a good Tower Defence game and so we highly recommend playing this game!

The final boss Xyllos is a real competition in hard mode.

If you enjoyed playing Incursion, please take the time to click the "Like" Button below. We use the Facebook Likes to generate our Game-Charts and the more Likes a game got, the higher it ranks.