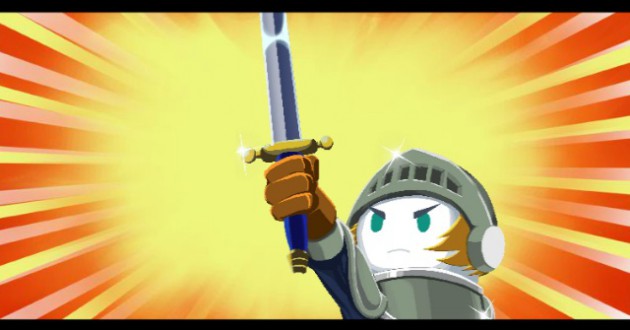 The evil Joker from the first part is back again and is looking for revenge. You can play right now Nano Kingdoms 2 - Jokers Revenge, the Defense Game for free. Once more, the fate of your world is lying in your hands and taking the sword is for sure. Free a prisoner after the other and face evil in the final battle. As usual, you possess your own castle from which you send out your units against the enemy and hopefully you carry out victory at last.

The game Nano Kingdoms 2 - Jokers Revenge is played by the mouse. On the left side you can see yourself with your castle. If you click on it you reach the building menu. There are commodities, which guarantee you a safe replenishment and further building, in which you produce your troopers. In those edifices you can also improve and perfect them.

On the battlefield you are also reliant on commodities since units need nourishment, metal and wood. If you possess enough of it you can click on the particular unit and it appears on the battlefield. In the middle on top you can send them to the front or set up a defending formation. Additionally, every hero in Nano Kingdoms 2 - Jokers Revenge has two magic spells, which are quite useful in battle.

In the fight you receive a certain amount of commodities of the enemy you kill. The goal is always to blow up the enemies castle to finally face the Joker and relieve the king.

The game is affectionately designed and the gameplay is well thought through. The only thing that isn't to nice is that you can not see all of your units at once in one screen. Maybe smaller symbols would have helped here. A few hotkeys could have helped as well. But still, it is a good sequel to the first part of Nano Kingdoms. That first part is, of course, also available here on our page. Difficulty is moderate and the Joker has a small secret in hand in the end. So a little Nano Kingdoms 2 - Jokers Revenge is worth being played and I wish you good luck and great fun with it!
Nice storyline

If you enjoyed playing Nano Kingdoms 2 - Jokers Revenge, please take the time to click the "Like" Button below. We use the Facebook Likes to generate our Game-Charts and the more Likes a game got, the higher it ranks.